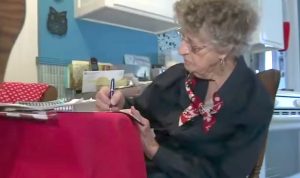 The men and women serving your country have signed up for an incredible sacrifice. However, although they put their lives on the line quite often, they are rarely thought of or thanked. Alleen Cooper, a ninety-eight-year-old grandmother is out to rectify that situation. She does this by writing handwritten letters to the soldiers who are deployed overseas. 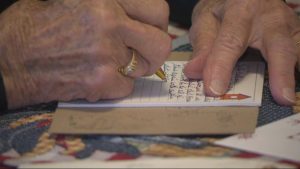 For Alleen, this is not something new, however. She has been writing these letters since World War II. She doesn’t care that she doesn’t know these individuals. Her goal is to make sure that as many soldiers as possible receive her letters. Alleen does have personal motivation, however. Her son fought in the Vietnam War and has been saddled with post-traumatic stress disorder as a result.

Alleen isn’t content with writing short notes, though. No, her letters are four pages long and she makes sure no two of them are alike. Her heartfelt letters are as unique as the people that she is sending them to. It is unclear just how many letters she has sent to soldiers over the span of her letter writing career. Alleen only started keeping track of the volume six years ago. According to her count, she has managed to send almost 7000 letters during this time! In this short period of time alone, she has written almost 30,000 pages.

She works hard to brighten up the days of the soldiers. In addition to voicing her gratitude, Alleen entertains the troops in other ways as well. She sends them news clippings, jokes, and numerous other tidbits. In many instances, her letters are a great source of comfort and entertainment for soldiers who solely rely on written communication. When there is no internet connection, many troops eagerly wait for their letters.

So, how do the recipients of her letters feel about this endeavor? They absolutely love it! Alleen receives a lot of letters from the people that she writes to. They even send her flags from their base as a token of their gratitude. She has even managed to Skype with soldiers on occasion. 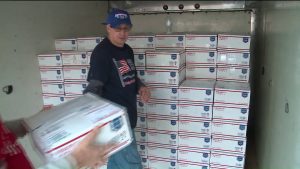 The letter writing is getting more and more difficult for Alleen. Close to a hundred years old, she doesn’t have the same amount of energy as she once did. Writing letters can now tire her out and even cause her hands to cramp up. Despite this, Alleen shows no signs of stopping. Although she admits that it is a little more difficult than before, she will continue to write. She says that she will write her letters for as long as she can.

She is an inspiration to all and certainly a source of comfort to troops who are far away from home. While it takes time and effort, Alleen makes a point of writing these letters at every chance she gets. She knows how much her correspondence means to these individuals and she is determined to be a bright spot in their lives. She is an example that everyone should follow.

Watch the video below: