Love fried food, but want to eat healthy? This kitchen gadget might be just what you need to suit those needs. 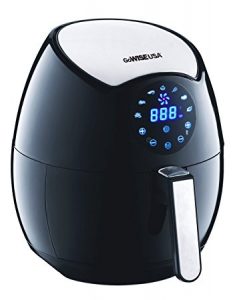 It’s composed out of a cooking chamber and a basket in which you can put the food. The air is circulated in the chamber through the food and the sides of the basket through a fan, cooking it just like a deep-fryer would. The heat transfer rate is bigger than in any other form of cooking.

Most of the models also have an exhaust system that will allow the internal pressure to be controlled.

Air Fryers also come with different settings and have timers incorporated. Unlike other similar appliances that use oil, these fryers are much smaller and are perfect to preparing healthy food.

There are a lot of skeptics that put that question, and the simple answer is yes, they do. Food gets crispy, French fries get perfectly done (although not as crispy as they would normally be), and the whole process is quite fast.

They don’t necessarily require oil; however, you can drizzle a little on whatever meat or dish you want to do to give it that certain flavor.

Features of the Air Fryer 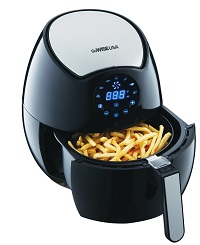 Like any other appliance, it comes with a lot of functions, like frying, grilling, roasting and even baking. It uses almost no oil, and the food gets crisp in a very healthy way.

They are very safe to use, even by children. The lack of oil or heat source make them a perfect appliance to have.

The price is fairly affordable, and the presets come in a large variety, for chicken, steak, meat, fish and veggies.

Some of them use halogen and infrared heating and convection besides air circulation to prepare your meal, and some don’t require the meat to be defrosted before preparation.

Convection ovens and Air Fryers are basically the same. Air gets blown around to create an even heating. A convection oven contains a heating element that will turn bright red, and a fan that will distribute the air through the oven.

When it comes to size, Air Fryers are much smaller than ovens. Cleaning it up is much easier than an oven too. 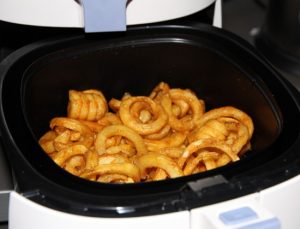 Also, convection ovens are not necessarily the best suited for baked goods as the circulated hot air might be too harsh on their surface. Air Fryers circulate the air much faster than an oven, but are much gentler on these types of foods due to the fact that they are not blown directly on the food, but rather around it. In addition, Air Fryers have their heating element placed on top of the food, whereas ovens usually have one up and one down.

Air Fryers are faster than an oven too, food being ready and crispy in almost half the time that it would require an oven to make them.

It does depend on your personal taste, whether you have the space and the time for a convection oven, or if you prefer the small gadget that is an Air Fryer.